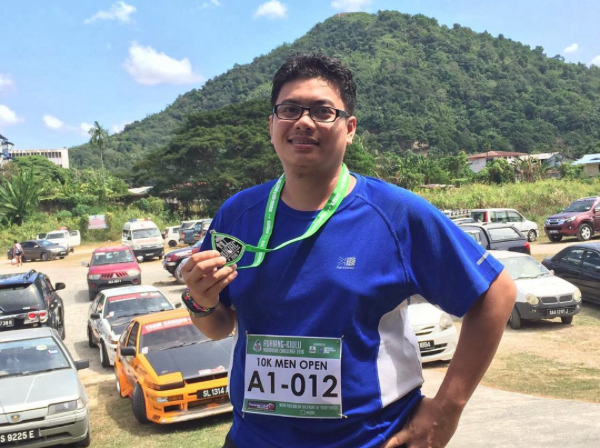 I signed up for this race without knowing what Adventure Challenge was. I started running in October 2015, well, mostly walk and jog. A friend showed me the poster and I just signed up for it online. I guess why not. As long as I finish the race, I said to myself.

About 3 months later, at the race collection kit / starting line for RUKIAC 2016, I saw the Bukit Perahu for the first time. What.the.hell. I calm myself by telling its ok to finish last as long as I complete the race. I joked to Haji Zul, my friend, whom felt nervous as well, that we will complete the race in 2 hours. Later on, I asked the volunteer if they ever just walk 10km to finish the course and how long it took them. He said 2 hours. OK, I said. Sounds good to me.

On the race day.

We woke up at 3 am, having slept at 11 pm last night (should be earlier). The race will start at 6 am, so it would take us 1 hour to get ready, and another 1 hour drive from Penampang (staying at friend house) to Tamparuli Tamu Ground. At 5 am we were already there. I think if we really started at 6.40am (for 10km category), we can escape the morning heat as it was during El Nino. However, we started late. So here we go.

At the starting point, I joined the 10km crowd. I was in the middle of the pack. Veteran and Open category were to be released at the same time. I look around and it was great to see many people joining the race. So the countdown started, and we all started running. This is where I made a mistake. Apparently when you positioned yourself in the middle, you will either accidentally stepped/kicked other people leg, or vice versa. I was struggling to get out of the crowd as some already walking after 100 meter dash. It’s a 10km race, why would you dash and found yourself panting 2 minutes later?

1km from the starting line is when you are going to climb the Bukit Perahu. This is where you will climb the 1km (approximately) steep uphill and narrow trail. I thought I’d escaped the crowd and will be able to run the uphill. My determination was really strong that morning. However, I was wrong. This is the 1km where almost all participants were walking / hiking. As the trail was narrow, I have to patiently hike, but at a considerable speed, careful enough not to bump my head on to other racer butt. It was really packed, and there were only few places where you can overtake other participant. Some stopped for a while, taking breath while their face looks so blue. My friend saw a woman cursing herself for joining this race. I guess this 1km climb really test your limit.

At the top of the hill, I saw many participant. They were taking pictures, group pictures, selfies & just sit there to relax while enjoying the morning view with the clouds below them. I heard the race volunteers described these people as having a good time merely taking selfie and all. I asked him where is the next route as I couldn’t see one. There were many people and they possibly blocked the mark. He showed me the way.

I continued running and this time I can feel my leg hurt. Possibly from hiking to fast. The best I can run uphill is at Bukit Kubong, Labuan, with the elevation of 40m. Bukit Perahu was 250m! The route was like stair case, uneven, but I managed to jump a few, and run most of it. Some people already there, taking pictures. Why they were not running?

2km onwards the trails was a combination of gravel and asphalt road. Sometimes I can feel like I was rolling on pebbles. At this point most participants were walking. I continued jogging, to rest my leg a bit. Then I walk, to rest my leg more. As long as I finish the race, is what matter – I said to myself. There was this one girl who stopped running and starting to walk with me to ask what time it was. Strange that she carried a casual backpack to the race. As long as she race – I believe. I told her it already passed 30 minutes since we started. Earlier I set my watch to just show the distance and time elapsed. She said thanks and started jogging, leaving me still walking with developing pain in my legs. 30 minutes since we started. That was a lot of time for less than 3km. I was way behind my target. So I started jogging and running where I can. I joked about 2 hours target but somehow I really want to achieve that target.

The first water station was at KM 4. The volunteers handed a bottle of water and I stopped to refill my water bottle. I consumed the power gel I’ve brought at this point. From KM 4 the route going through villages and farm. I stopped once to take a picture. I don’t take selfie. I don’t like selfie. I just don’t. 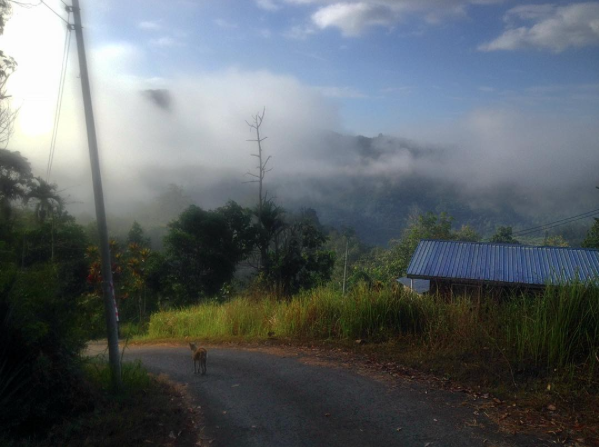 The clouds were still rolling and I did run through the morning breeze. It was refreshing and it made me relax. There were not many participants at this point. As we entered the farm area, this is where it’s starting to be difficult. The path were marked with red & white tape but only on certain places. I remember another friend shared a story to me about the previous race. About how poor the race was organised; lots of runner got lost which made them run 42 km instead of 21 km. It was crazy, I said. Because of that, a lot of runner avoid to join the race this year. Or maybe because the fee is getting expensive. With that in mind, I carefully scanned the trail and look for any mark. The organiser could make a better signage to guide runners.

I think it was at KM 5 that I landed hard, flat on my feet and it added more pain to my legs. It was uneven terrain and the fact that they made a shortcut to go straight down the hill instead of following the winding trail was what caught me. Yes, instead of driving down the hill on the winding road, you just hit the barrier so you can reach down there faster in a straight line. I stopped and hesitated few times to plan my steps. Some were not lucky as they’d tripped on logs, small trees and fell. There were logs as ‘steps’, but if you’re not careful enough…. oh, well.

KM 6 – 7, the trail was ok. A combination of gravel and asphalt. There were many dogs as it was still within village area. I remember there was this guy/girl asking the organiser yesterday about these dogs. Could there be anyone chased by these dogs in previous race? But it just sat there minding their own business, occasionally glance at you for a few seconds before continuing to what they are doing. I walked most of the time. The pains shows no sign of subsiding. I remember the important thing about running is to know when the body says “stop!”. As long as I finish the race, is what matter – I said to myself many times now. It was my first race, and no one fly on their first time.

KM 7 – 9, I jog and walk. I cannot run at this point. 1 hour and 50 minutes. 10 more minutes before the 2 hours target. I will run on the last KM. Perhaps many has completed the race 1 hour earlier. I saw Guianus Salagan, Sabah’s top endurance athlete earlier at starting line. He could already be sipping orange juice at home by now. And some other runners who looks very athletic, perhaps they are already discussing about the race under the shade at the finishing point by now. And me, a first timer, trying to content my muscle pain, still walking and already thinking about food. Yes, food. I consumed another power gel and drank a lot of water.

Another runner approached me and started a little talk. We talked a little bit about the race. About the trail. About Borneo International Marathon in May. At Water Station KM 9, I said goodbye and started jogging. Yusri whom joined us for this trip but not the race were there taking pictures. I asked if Haji already pass this check point. Yes, 15 minutes earlier. I continued jogging. 2 hours now. Might not achieve the target, but a few more minutes should be an exception.

I completed the race in 2 hours 9 minutes.

That’s me #76. Full result for all categories can be viewed at THIS PAGE.

I had muscle pain in both legs, causing me to walk like penguin and had to take 1 day off from work. With proper meds and food consumption, I recover a day later. I guess I pushed too hard during the race. I didn’t run for a week to recover.

RUKIAC 2016 was ok to me. There’s nothing that caused me trouble. Perhaps the organiser has learnt from their past mistake. Hopefully I can join RUKIAC 2017 and improve my time. 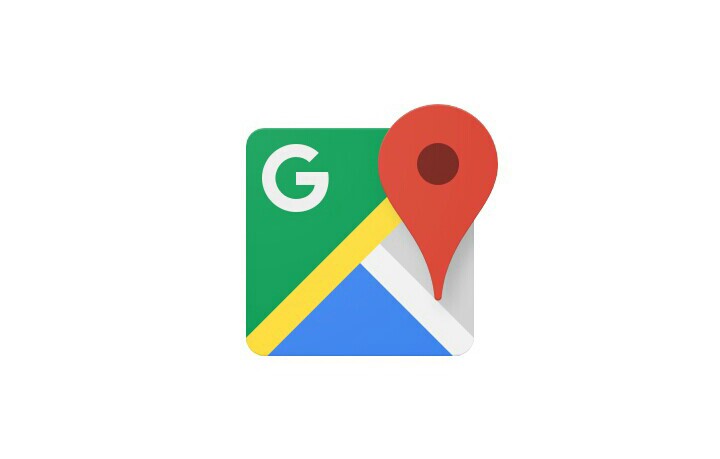 How to plan running route with Google Maps 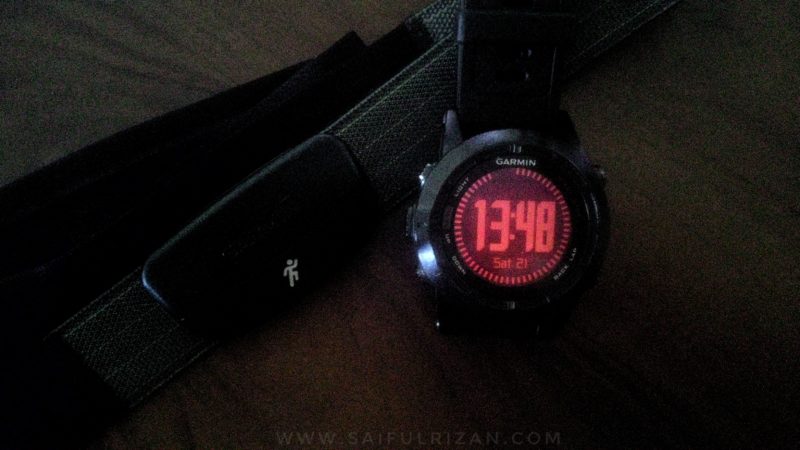 Garmin Connect recognised my Run as Other Activity 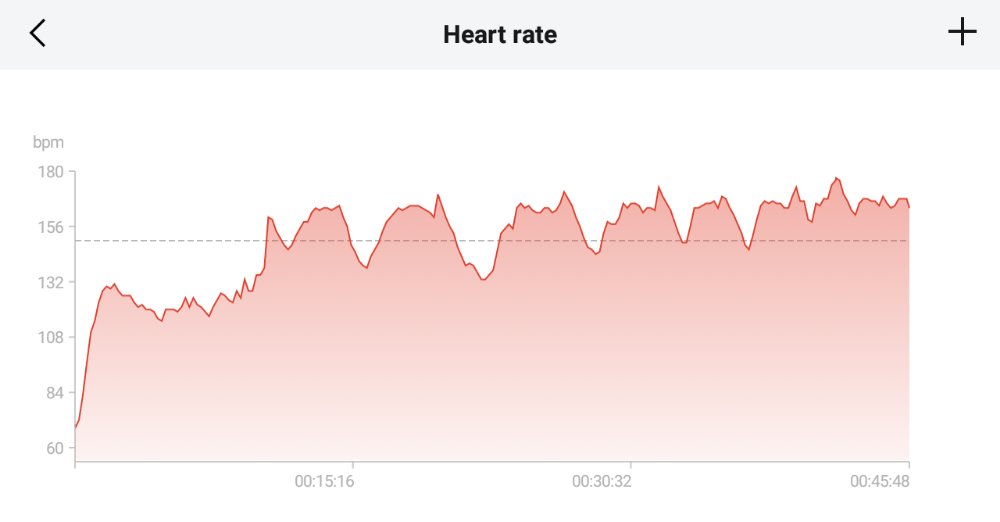